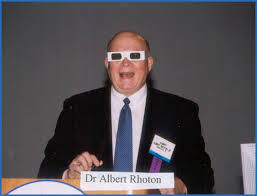 Albert Rhoton, Jr., was an American neurosurgeon and a professor specializing in microsurgical neuroanatomy. He developed and introduced a number of microsurgical techniques that improved the safety and effectiveness of neurosurgery, including the use of the surgical microscope in neurosurgery.

He also designed many of the commonly used of microsurgical instruments, which bear his name.

Rhoton was born in the 1930s in Parvin, Kentucky. He received his medical and surgical training at Washington University in St. Louis in 1959. He interned at Columbia Presbyterian Medical Center, and returned to Washington University and Barnes Jewish Hospital, where he completed his neurosurgery residency and a one-year National Institutes of Health (NIH) research fellowship in neuroanatomy.

It was during this fellowship that he began his studies of microsurgical anatomy, which are now widely published. He joined the staff of the Mayo Clinic in Rochester, Minn. in 1965 and became the head of neurosurgery at the University of Florida in 1972.

In 2014 Rhoton was the director of the Neuro-Microanatomy Lab at the McKnight Brain Institute.

Dr. Rhoton has been the honored guest or elected to honorary membership in more than 20 neurosurgical societies throughout the world. He has also been awarded the Cushing Medal of the AANS, the Founders Laurel Award of the CNS, and the Medal of Honor of the World Federation of Neurosurgical Societies. He has served on the editorial board of more than a dozen journals, and has authored more than 400 articles and two books. He recently completed the millennium and 35th anniversary issues of NEUROSURGERY that were based on his studies of microsurgical anatomy. His book, Cranial Anatomy and Surgical Approaches has been translated into several languages and he has developed more than 200 instruments for neurosurgery. At the time of becoming chairman emeritus in 1999, colleagues created the Rhoton Chairman's Endowed Professorship at the University of Florida.

Stereoscopy has been used very successfully to demonstrate microsurgical anatomy by Albert L. Rhoton and co-workers 1).

Albert L. Rhoton Jr., MD, was born Nov. 18, 1932, in rural Parvin, Ky., in a log cabin without electricity or plumbing. From humble beginnings, in a small two-room school, he earned a degree in social work from Ohio State University then completed the premedical curriculum and went on to the Washington University School of Medicine where he graduated with the highest academic standing in the class of 1959.

During summer elective periods in medical school, he did research on the trigeminal nerve and cerebellar electrophysiology. He entered his internship at Columbia Presbyterian Medical Center in New York where he had two years of training: one in general surgery and one in neurological surgery. He then returned to Washington University and Barnes Hospital to complete his neurosurgery residency and served as a National Institute of Health Research Fellow in Neuroanatomy with Dr. Henry Schwartz for one year. In 1966, he was invited to join the clinical and research staff of the Mayo Clinic where began his studies of microsurgical anatomy.

In 1972, he assumed the position of Professor of Surgery and Chief of the Division of Neurological Surgery at the University of Florida College of Medicine in Gainesville, Fla. In 1980, the R. D. Keene family of Orlando, Fla., donated a one million dollar gift to endow a professorship, which Dr. Rhoton held since that time and which funded many of his anatomic studies.

His career also included enormous contributions to organized medicine and neurosurgery starting soon after joining the Mayo staff. He was elected to the executive committee of the Congress of Neurological Surgeons (CNS) in 1972 and president in 1978. He then went on to be elected treasurer of the American Association of Neurological Surgery (AANS) in 1983 and president in 1990. In addition, he served as president of the Society of Neurological Surgeons (SNS), the Florida Neurosurgical Society (FNS), the North American Skull Base Society (NASBS), the International Interdisciplinary Congress of Craniofacial and Skull Base Surgery, and the International Society for Neurosurgical Technology and Instrument Invention; chairman of the Cerebrovascular Section of the AANS and CNS; governor of the American College of Surgeons (ACS); director on the American Board of Neurological Surgery (ABNS) and a member of the Appeals Panel of the Accreditation Council for Graduate Medical Education (ACGME), which accredits neurosurgical residencies.

Appropriately, honors and awards were bestowed on Dr. Rhoton including the Honored Guest of the CNS and the Cushing Medalist of the AANS. He has been the honored guest or elected to an honor membership in more than 20 neurological societies throughout the U.S., Latin America, Europe, Asia and Africa.

Dr. Rhoton clearly excelled at teaching, training more than 50 residents and more than 100 microsurgical anatomy neurosurgeon Fellows. In 1975, he initiated microsurgery courses at the University of Florida that have been attended by more than 1,000 neurosurgeons and residents. He has also directed dissection courses at the annual meetings of the AANS and the CNS and in multiple countries throughout the world, which have been attended by thousands of residents and practitioners.

Scholarship was equally important in Dr. Rhoton’s career, having served on the editorial board of a dozen journals, including Neurosurgery and Surgical Neurology, publishing 400 scientific papers and chapters and writing three books. He contributed many full issue supplements to Neurosurgery, featuring his outstanding neuroanatomical studies that have truly changed the way that all neurosurgeons perform microsurgery and have improved the outcome of surgery for uncounted patients.

Dr. Rhoton was truly a master surgeon. He began his career at a time when microsurgery was emerging as a key component of neurosurgery, and he developed more than 200 instruments that helped make these approaches successful. His clinical practice focused on cranial nerve disorders, skull base surgery and surgery for pituitary tumors and acoustic neuromas. Dr. Rhoton’s gentle, kind, calm and reassuring manner was the hallmark of his patient care. One of his mottos was “the neurosurgeon’s best ally in the treatment of neurosurgical illness is a well-informed patient.” He was listed in multiple peer surveys as being among the best neurosurgeons in the U.S.

In January 1999, after 27 years as chair, he elected to give up his leadership role in the department in order to focus on his clinical, educational and research activities. To honor him during this transition, his former residents, donors and friends contributed more than two million dollars to be matched by another two million dollars to complete the Albert L. Rhoton Jr., Chairman’s Professorship in the Department of Neurological Surgery.

He met Joyce Rhoton, his wife of 58 years, while he was a medical student and she an Occupational Therapy student at Washington University. They were active members of the Lutheran church. Their two sons are physicians: one in neurosurgery and one in gastroenterology. Their two daughters are also pursuing medical careers: one as a reproductive endocrinologist and the other as a pediatric nurse. They have 12 grandchildren and three great grandchildren.

Throughout his distinguished career Dr. Rhoton demonstrated that the only limits to what a person can achieve are the limits that are self-imposed. He was a source of inspiration and hope to the world of neurosurgery and to his many grateful patients.

The whole world of neurosurgery is mourning as one over the death of Dr. Albert Loren Rhoton Jr. Dr. Rhoton was one of the founding fathers who changed how we, as neurosurgeons, care for our patients. His contributions spanned the depth and breadth of our profession, including research, teaching, mentoring, technical skill and clinical care. He has touched each of us, and thus, his work will live on. During this time, our sincerest condolences are extended to his many friends, close colleagues and loving family.

Many of you may wish to honor Dr. Rhoton. The family has requested that donations be made to First Lutheran Church, 1801 NW 5th Ave. Gainesville, Fla. 32603 or to the Neurosurgery Research and Education Foundation