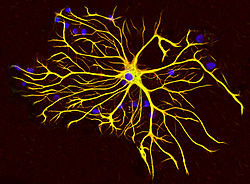 Astrocytes (Astro from Greek astron = star and cyte from Greek “kyttaron” = cell), also known collectively as astroglia, are characteristic star-shaped glial cells in the brain and spinal cord. They are the most abundant cells of the human brain.

They perform a wide array of functions, yet the nature of their cellular heterogeneity and how it oversees these diverse roles remains shrouded in mystery.

Functions include biochemical support of endothelial cells that form the blood–brain barrier, provision of nutrients to the nervous tissue, maintenance of extracellular ion balance, and a role in the repair and scarring process of the brain and spinal cord following traumatic injuries.

Such discoveries have made astrocytes an important area of research within the field of neuroscience.

Kynurenic acid (KYNA) is the end stage metabolite of tryptophan produced mainly by astrocytes in the central nervous system (CNS).

Findings indicate a critical contribution of astrocytes, star-shaped glial cells in the brain, to neuronal and network excitability and seizure activity. Furthermore, many important cellular and molecular changes occur in astrocytes in epileptic tissue in both humans and animal models of epilepsy.

Using an intersectional fluorescence-activated cell sorting-based strategy, John Lin et al., identified five distinct astrocyte subpopulations present across three brain regions that show extensive molecular diversity. Application of this molecular insight toward function revealed that these populations differentially support synaptogenesis between neurons. They identified correlative populations in mouse and human glioma and found that the emergence of specific subpopulations during tumor progression corresponded with the onset of seizures and tumor invasion. In sum, they have identified subpopulations of astrocytes in the adult brain and their correlates in glioma that are endowed with diverse cellular, molecular and functional properties. These populations selectively contribute to synaptogenesis and tumor pathophysiology, providing a blueprint for understanding diverse astrocyte contributions to neurological disease 1).

Astrocytes and Epilepsy By Jacqueline A. Hubbard, Devin K. Binder

The goal of Astrocytes and Epilepsy is to comprehensively review exciting findings linking changes in astrocytes to functional changes responsible for epilepsy for the first time in book format. These insights into astrocyte contribution to seizure susceptibility indicate that astrocytes may represent an important new therapeutic target in the control of epilepsy.

Astrocytes and Epilepsy includes background explanatory text on astrocyte morphology and physiology, epilepsy models and syndromes, and evidence from both human tissue studies and animal models linking functional changes in astrocytes to epilepsy. Beautifully labelled diagrams are presented and relevant figures from the literature are reproduced to elucidate key findings and concepts in this rapidly emerging field. Astrocytes and Epilepsy is written for neuroscientists, epilepsy researchers, astrocyte investigators as well as neurologists and other specialists caring for patients with epilepsy.

Presents the first comprehensive book to synthesize historical and recent research on astrocytes and epilepsy into one coherent volume.

Provides a great resource on the field of astrocyte biology and astrocyte-neuron interactions.