The Calgary Spine Severity Score (CSSS) is a 15-point scoring system devised for the purpose of triaging elective surgical spine referrals. From the referral letter and the accompanying radiology report, a total score is calculated based on clinical, pathological, and radiological criteria; a maximum score of 5 can be obtained within each category. A higher total score represents a referral that should be seen more urgently. 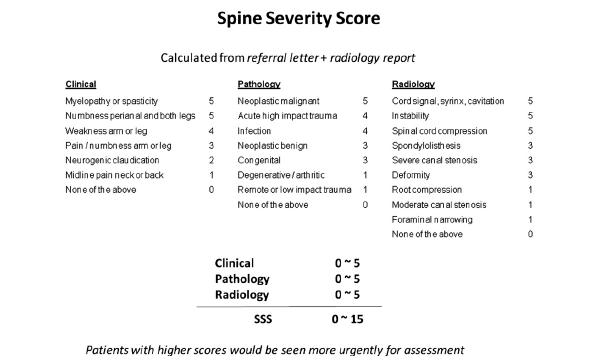 The Calgary Spine Severity Score (CSSS) is a published triage score reported in The Spine Journal in 2010. It separates spine referrals into four time categories of urgency 1).

A prospective cross-comparison design was used to evaluate the reliability and convergent validity of the SSS using spine case referrals.

Four spine surgeons (experts) and three administrative assistants (nonexperts) at the University of Calgary scored 25 referrals. A second iteration of scoring was performed with a minimum time interval elapsed of 6 weeks. Raters were instructed to choose the most concerning (the one with the highest associated score) descriptor in each category that was thought relevant to the individual referral. No further instructions were given on how to interpret the referral letter or the radiology report. The surgeons also scored the referrals using their own preexisting four-point scoring systems. The results were analyzed with independent and dependent t tests, Pearson product moment correlation coefficient, and generalizability and decision analysis.

An independent-measures t test (p>.05) revealed no statistical differences between experts and nonexperts (ie, interrater reliability) for both Iterations 1 and 2 on total scores of the SSS and a moderately strong relationship between their ratings across iterations (r=0.79, p<.001). Similarly, a paired-samples t test (p>.05) indicated a nonsignificant mean difference between Total SSS ratings at Time 1 and Time 2 (ie, intrarater reliability) and a high degree of agreement (r=0.96, p<.001) between the two iterations. These results were confirmed with correlational analyses. Pearson product moment correlation coefficients between the gold standard and the mean score were calculated from expert ratings on Total SSS at Time 1 (r=0.71, p<.001) and at Time 2 (r=0.69, p<.001).

The CSSS is a reliable scoring system for triage of elective spine referrals, even among nonexperts. We have been able to demonstrate strong interrater and intrarater reliability for the SSS and moderately strong correlation with the traditional triage system 2).

St-Pierre et al. applied the CSSS to an unselected sample of consecutive patients from a tertiary care hospital between April 2014 and September 2014. Demographic and clinical data was collected. The CSSS was determined. They compared the time to OR predicted by the CSSS in one of four categories (Routine > 6 months = CSSS 3-5, Priority < 6 months = CSSS 6-8, Urgent < 1 month = CSSS 9-11 and Emergent < 1 week = CSSS 12-15) with the actual time to OR. They used Kaplan Meier survival analysis to assess the CSSS predictive ability. Cox proportional hazard model were built and compared via ANOVA to determine if the models differed in their ability to fit the data.

Three-hundred and sixteen patients were eligible. Two-hundred and eighty-nine had sufficient data. One-hundred and eighteen were a mismatch with the actual time to OR yielding an accuracy of 63%. The CSSS overestimated the urgency in 68 cases and underestimated it in 50 cases. Notably, 7 cauda equina syndrome cases were classified as priority (<6 months) instead of emergent. The concordance was 0.70 and the R-square 0.33. We proposed several adjustments to the CSSS to increase its accuracy. The modified CSSS had an accuracy of 96%, overestimating 9 cases and underestimating 1 case. The concordance was 0.77 and the R-square 0.70.

The modified CSSS is an easy to use triage score which represents a substantial improvement as compared to the original CSSS. It now requires further external validation 3).