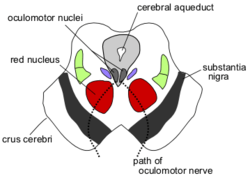 The cerebral crus (crus cerebri) is the anterior portion of the cerebral peduncle which contains the motor tracts, the plural of which is cerebral crura.

In some older texts this is called the cerebral peduncle but presently it is usually limited to just the anterior white matter portion of it.

Kernohan notch phenomenon is an imaging finding resulting from extensive midline shift due to mass effect, resulting in indentation in the contralateral cerebral crus by the tentorium cerebelli. This has also been referred to as Kernohan-Woltman notch phenomenon and false localising sign.