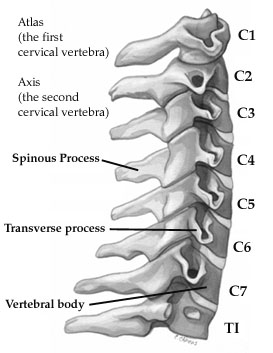 The cervical spine is C shaped with its curve facing towards the back of neck. The spinal area in neck is called cervical spine and it is made up of 7 cervical vertebra.

The cervical spine is a dynamic structure tasked with protecting nervous innervation to the entire body while also maintaining range of motion for the head and neck.

The atlas (C1) and the axis (C2) differ markedly from other cervical vertebrae.

The normal anatomy of the cervical spine consists of 7 cervical vertebrae separated by intervertebral disks and joined by a complex network of ligaments. These ligaments keep individual bony elements behaving as a single unit.

The cervical spine naturally has a lordotic curve.

The middle column is composed of the posterior longitudinal ligament and the posterior one third of the vertebral bodies, the annulus and intervertebral disks. The posterior column contains all of the bony elements formed by the pedicles, transverse processes, articulating facets, laminae, and spinous processes.

The anterior and posterior longitudinal ligaments maintain the structural integrity of the anterior and middle columns. The posterior column is held in alignment by a complex ligamentous system, including the nuchal ligament complex, capsular ligaments, and the ligamenta flava.

The Cervical Spine Research Society is a multidisciplinary organization that provides a forum for the exchange of ideas and promotes clinical and basic science research of the cervical spine.