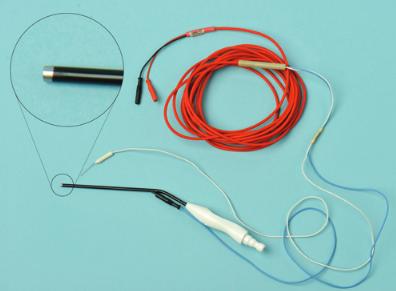 “Dynamic” refers to the quickly changing location of the suction tip, which enables mapping at the current site of tissue removal. Stimulation (2 Hz) is activated by connecting the cable for the standard monopolar fingerstick probe directly to the suction device.

The surface of the suction probe is isolated to limit electrical contact to the tip of the device. Otherwise, identical stimulation pa rameters as for the classic monopolar train-of-five (TOF; interstimulus interval 4.0 msec, pulse duration 500 m sec).

Seidel et al. developed a subcortical mapping technique based on the concept of stimulating the tissue at the site of and synchronously with resection. The hypothesis was that instead of performing resection and mapping sequentially, a synchronized resection and mapping could potentially improve deficit rates.

Continuous dynamic mapping was found to be a feasible and ergonomic technique for localizing the exact site of the CST and distance to the motor fibers. This new technique may improve the safety of motor eloquent tumor surgery 1).