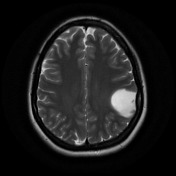 WHO grade determinations are still made on the basis of histologic criteria. Another reason why phenotype remains essential is that, there are individual tumors that do not meet the more narrowly defined phenotype and genotype criteria, e.g., the rare phenotypically classical diffuse astrocytoma that lacks the signature genetic characteristics of IDH and ATRX mutations. Nevertheless, it remains possible that future WHO classifications of the diffuse gliomas, in the setting of deeper and broader genomic capabilities, will require less histological evaluation—perhaps only a diagnosis of “diffuse glioma.” For now, the World Health Organization Classification of Tumors of the Central Nervous System 2016 is predicated on the basis of combined phenotypic and genotypic classification, and on the generation of “integrated” diagnoses.

Nonetheless, this has not been noted in all studies. At this time, it is recommended that WHO grading is retained for both IDH-mutant and IDH-wildtype astrocytomas, although the prognosis of the IDH-mutant cases appears more favorable in both grades. Cautionary notes have been added to the 2016 classification in this regard.

For the diffuse astrocytomas, there have been many such studies over the past century and these have proven useful in estimating prognosis for patients. With the advent of molecular diagnostics and the recent World Health Organization (WHO) Classification of Tumors of the Central Nervous System it is necessary testing for isocitrate dehydrogenase (IDH) gene status in the classification of diffuse astrocytic gliomas. Novel approaches to diffuse astrocytic tumor grading are required in the era of IDH testing 2).

Alattar et al. determined the influence of age and tumor location on survival benefit from GTR in diffuse astrocytoma (DA).

They used The Surveillance, Epidemiology and End Results (SEER) database (1999-2010). They used Kaplan-Meier curves and Cox survival models to determine the survival benefit from GTR in populations stratified by age and tumor location. They determined the prevalence of the IDH mutation (mIDH) using The Cancer Genome Atlas (TCGA).