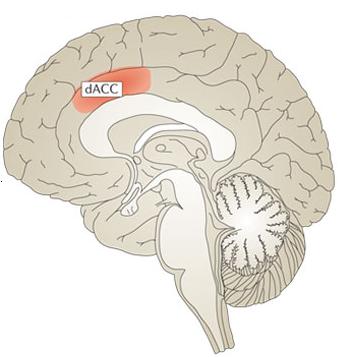 Human dorsal anterior cingulate cortex (dACC) includes the cingulate gyrus and cingulate sulcus from the levels of the genu of the corpus callosum anteriorly to the anterior commissure posteriorly. The human dACC has been implicated in various aspects of action selection, including reward-dependent decision making, conflict monitoring and representation of error likelihood.

Tinnitus distress has been linked to increased beta oscillatory activity in the dorsal anterior cingulate cortex (dACC). The amount of distress is linked to alpha activity in the medial temporal lobe (amygdala and parahippocampal area), as well as the subgenual (sg)ACC and insula, and the functional connectivity between the parahippocampal area and the sgACC at 10 and 11.5 Hz.

Although abnormalities in brain structure and function in obsessive compulsive disorder (OCD) are distributed across a wide network, the dorsal anterior cingulate cortex (dACC) plays a central role. McGovern and Sheth propose a theory of cognitive control dysfunction in OCD that attempts to explain the therapeutic efficacy of dACC neuromodulation. This theoretical framework should help to guide further research into targeted treatments of OCD and other disorders of cognitive control 3)