Encephaloceles are congenital disorders characterized by externalization of the meninges and/or brain tissue through a congenital skull bone defect.

They arise from inadequate closure of neural tube during the first month of embryonic development.

Encephaloceles cause a groove down the middle of the skull, or between the forehead and nose, or on the back side of the skull. The severity of encephalocele varies, depending on its location.

Despite many theories, the cause of congenital cephalocele is not known.

These defects are caused by failure of the neural tube to close completely during fetal development. 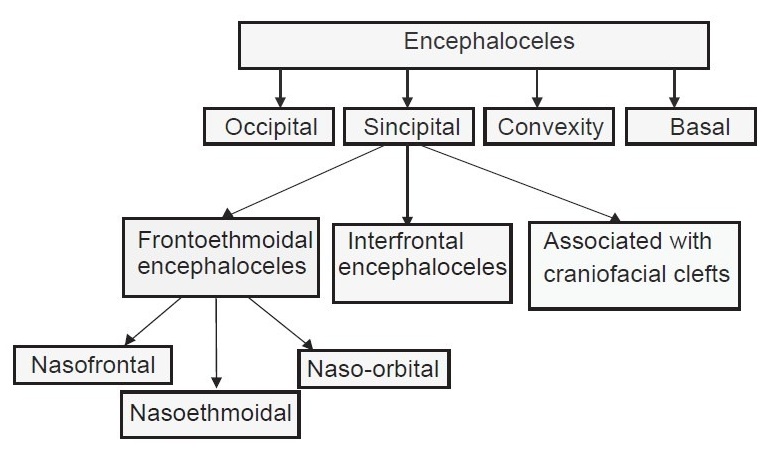 They are also classified according to their contents and location.

Surgical management is multidisciplinary in nature. The aim is to remove the lesion before the deformity has time to greatly distort facial growth, which appears to realign itself after surgery.

The most suitable solution is a policy of prevention with folic acid treatment before and during pregnancy and following up adequate pregnancies 3).

After surgery, mental failure and hydrocephalus can occur impairing the prognosis.

In a retrospective study of the association of hydrocephalus with neural tube defect (spina bifida or cephalocele) managed over a period of 7 years at the Department of Neurosurgery, University Hospital Yalgado Ouedraogo, thirty-eight cases were included. The mean age was 8.1 months, and the sex ratio was 0.81. There were 27 cases of spina bifida and 11 cases of cephalocele associated with hydrocephalus. A cerebral CT scan was performed in all patients. In 30 cases, the operative management of these pathologies was performed at the same operative time. Eight cases were operated in 2 separate operative stages with a mean time of 30 days between the 2 operations. The course was favorable in 22 patients operated by the simultaneous approach and in 3 patients operated by the separate approach (p = 0.07).

Surgical management of the association of hydrocephalus with neural tube defect in 1 or 2 operative stages gave similar clinical results. However, the treatment in 1 surgical stage would considerably reduce the charges 4).

Data of all neonates with encephaloceles who presented to the Department of Neurosurgery, Universitätsmedizin Greifswald, Klinik und Poliklinik für Neurochirurgie, Germany and Department of Neurosurgery, Cairo University Kasr Alainy Faculty of Medicine, Cairo, Egypt from September 2012 to September 2014 were collected. Surgery was performed during the first 2 weeks of age. Encephaloceles with a maximal diameter > 10 cm were included in the study, and the clinical picture, surgical technique, pre- and postoperative imaging, and follow-up were analyzed. Results Nineteen cases were included in this study. The mean follow-up period was 7 months. Sixteen cases were occipital; three were frontal. In all patients the maximum diameter was > 10 cm. However, in four patients it was > 18 cm. Postoperative ventriculomegaly occurred in seven cases. Of these, four patients needed a permanent ventriculoperitoneal shunt implantation (21%). Wound dehiscence occurred in two patients who required secondary sutures with a favorable outcome. One patient died 2 weeks after the surgery due to a poor general condition and wound infection. Conclusion Early surgical excision provides effective treatment of huge encephaloceles. Overall, 21% of cases require cerebrospinal fluid (CSF) diversion afterward depending on associated anomalies. Despite their size, giant encephaloceles can have an excellent prognosis with no need for further treatment or CSF diversion 5).

A retrospective analysis of 32 occipital encephaloceles managed operatively at the Neurosurgery Department Clinics of the Faculty of Medicine, Adıyaman University Turkey, was performed between 2011 and 2015.

Among the study population, 19 mothers had been exposed to TORCH infections (toxoplasmosis, rubella, cytomegalovirus, herpes simplex virus), 18 were in consanguineous marriages, and 3 had regular prenatal screening. Associated congenital anomalies were common. Eight infants required reoperation, and 9 died during follow-up.

The study identified key areas for prevention. Knowledge of the intracranial and associated anomalies can guide management. 6).

A retrospective study was conducted from 2007 to 2013 on all cases of cephalocele supported in the department of neurosurgery of the Yalgado Ouédraogo University Teaching Hospital of Ouagadougou. The malformations were supplemented by CT scan. All patients were operated. The surgical procedure in cephaloceles of the convexity consisted of a direct approach. Sincipital cephaloceles were operated by transcranial approach or combined approach associating transcranial and transnasal approaches.

Fifty patients were gathered during the 7-year period. There were 18 boys and 32 girls. The ages ranged from 1 day to 11 years. The cephaloceles were located on the vault of the skull in 78%; the lesion was sincipital in 22%. The malformation was covered with normal skin in 92%; it was pediculated in 78%. CT scan allowed the classification of cases as meningo-encephaloceles in 31 cases (62%) and meningoceles in 18 cases (36%) and one pure encephalocele. The immediate postoperative course was uneventful in 42 cases (84%); 8 postoperative deaths were recorded. At medium and long term, 4 patients (8%) developed complications of psychomotor deficiency in 3 cases and hydrocephalus in 1 case. The main reasons for the poor prognosis were superinfection, hydrocephalus and/or other brain malformations 7).