The cranial cavity is a closed compartment and any breach to this confined space secondary to neurosurgery or trauma cause an imbalance between atmospheric pressure and intracranial pressure.

Intracranial pressure (ICP) is derived from the circulatory cerebrospinal fluid dynamics and cerebral blood flow that occur within the rigid intracranial compartment 1).

Intracranial pressure (ICP) is the pressure inside the skull and thus in the brain tissue and cerebrospinal fluid (CSF). The body has various mechanisms by which it keeps the ICP stable, with CSF pressures varying by about 1 mmHg in normal adults through shifts in production and absorption of CSF.

CSF pressure has been shown to be influenced by abrupt changes in intrathoracic pressure during coughing (intraabdominal pressure), valsalva (Queckenstedt's maneuver), and communication with the vasculature (venous and arterial systems). ICP is measured in millimeters of mercury (mmHg) and, at rest, is normally 7–15 mmHg for a supine adult.

Changes in ICP are attributed to volume changes in one or more of the constituents contained in the skull.

In normal circumstances the ICP is kept in its normal range, maintaining the relationship between the cerebrospinal fluid (CSF), the intracerebral blood, and brain tissue constant. 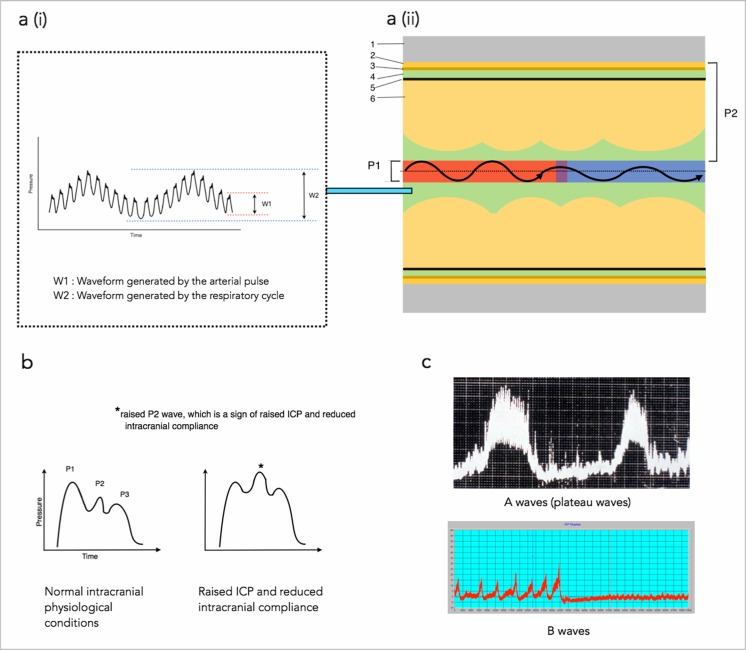 An illustration of the ICP waveform components. a (i) The ICP waveform showing the cardiac component (W1) and respiratory component (W2). The cardiac component consists of three peaks: P1 (reflects arterial pulsation), P2 (reflects, to a degree, intracranial compliance) and P3 (reflects aortic valve closure). The respiratory component reflects the cerebral venous pulsation generated by the changes in intra-thoracic pressure that is generated by respiration. a (ii) An illustration of what the individual ICP wave form peaks represent in terms of intracranial physiology. The black oscillating arrow represents arterial pulsations (red area), which subsequently become venous pulsations (blue area) as cerebral blood travels through the cerebral vasculature. P1 is the pressure generated in the CSF as a result of the pressure generated from the arterial pulsation. P2 is the pressure generated within the CSF as a result of the forces generated from both the pulsatile blood vessel and the resistance from the intracranial tissue. The higher the resistance is, the greater the pressure within the CSF and therefore the greater the P2 wave amplitude. Note the intracranial compliance, and therefore the value of P2, can be affected by any factor from the endothelium of the cerebral blood vessel to the intracranial surface of the skull (represented by P2) Diagram key: 1, skull; 2, dura layer; 3, arachnoid layer; 4, subarachnoid space containing the cerebrospinal fluid (represented in green); 5, pia layer; 6, cerebral tissue. b The individual ICP waveform peaks. Under the normal intracranial physiological state, P1 > P2 > P3. However when ICP is raised, and there is reduced intracranial compliance, P1 < P2 > P3. c The slow vasogenic waves of ICP, secondary to autoregulation-derived cyclic fluctuations of arterial blood volume. A waves, or plateau waves, always indicate pathology and signify reduced intracranial compliance. Once they are present, the patient will likely have neurological deterioration. They involve a steep rise in ICP from around a normal value to 50 mmHg or more. They persist for 5-20 min after which there is a sharp decline. B waves are more subtle than A waves and can indicate several abnormalities of intracranial homeostasis including being an indicator of failing intracranial compensation. It is important to note however that they can also be present in patients with normal ICP. B waves are rhythmic oscillations with ICP rising in a crescendo manner to levels 20–30 mmHg higher than baseline, with a subsequent sharp decline. They occur every 1–2 min. Note, Lundberg A waves and B waves refer to raises in static (mean ICP) and are not related to the pressure fluctuations during the cardiac cycle, which is the case for ICP wave amplitudes

In newborns, CSF pressure ranges from 8 to 10 cmH2O (4.4–7.3 mmHg or 0.78–0.98 kPa). Most variations are due to coughing or internal compression of jugular veins in the neck. When lying down, the cerebrospinal fluid as estimated by lumbar puncture is similar to the intracranial pressure.

A “normal” ICP should not be considered only in light of a particular cut-off value, because waveform analysis of the ICP is also important. ICP waveform analysis can provide information on the state of cerebrovascular reactivity (PRx) and can be used to estimate optimal cerebral perfusion pressure levels for individual patients 2)

ICP, as monitored and managed according to Brain Trauma Foundation (BTF) guidelines, is not associated with ICU length of stay 3).