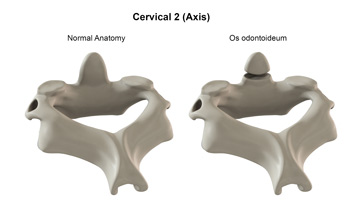 Hypoplasia of the Odontoid process associated with an independent oval ossicle, with smooth margins widely separated from C2 and well above the superior facets of the axis, is termed “os odontoideum”

Carlo Giacomini was the first to describe the os odontoideum in 1886 and to suggest that the presence of an incompetent odontoid process may alter the motion of craniovertebral junction, anticipating the concept of spine instability 1).

It is a rare anomaly.

One theory states that the apex of the odontoid separates from the body because of a fracture. The intact alar and apical ligaments pull the fractured segment superiorly. The independent vascular supply of the apex allows the fractured bone to remain viable and remodel into the smooth, corticated bone characteristic of an os odontoideum. However, there are no publications with direct radiographic evidence supporting the theory 2).

The neurological manifestations arise from bulbospinal compression both at rest and during motion, due to the craniovertebral junction (CVJ) instability itself.

There is a role for conservative treatment of an asymptomatic incidentally found, radiologically stable, and noncompressive os odontoideum, however surgery has a definite role in symptomatic cases 5).

Consequently, the surgical management of os odontoideum should aim at achieving both neural decompression and stabilization of the craniovertebral junction (CVJ) 6).

During the period January 2000 to September 2018, 190 patients having os-odontoideum were surgically treated. There were 113 males and 77 females and their ages ranged from 2 to 68 years (average 24 years).The patients were divided into three groups depending on the nature of atlantoaxial dislocation (Group 1- mobile and partially or completely reducible atlantoaxial dislocation, Group 2- fixed or irreducible atlantoaxial dislocation and Group 3- presence of basilar invagination). Sixty- five patients were in pediatric age group (less than 18 years). All patients underwent atlantoaxial joint manipulation and lateral mass plate and screw fixation. The operation was aimed at segmental atlantoaxial arthrodesis. No transoral or posterior foramen magnum bone decompression was done. Occipital bone was not included in the fixation construct.

Os-odontoideum signifies chronic or longstanding atlantoaxial instability. Segmental atlantoaxial fixation is a reliable form of surgical treatment. Any form of bone decompression is not necessary. Inclusion of occipital bone and subaxial vertebrae in the fixation construct is not necessary 7).

A total of 119 patients who underwent atlantoaxial fixation for instability were identified between January 1998 and January 2014. Inclusion criteria included age more than 21 years and diagnosis of OO and non-OO. There were 22 OO patients, and 20 non-OO patients. Measuring the Oc-C1 Cobb angle, C1-2 Cobb angle, C2-7 Cobb angle, and C2-7 sagittal vertical axis (SVA) was assessed. Clinical outcome was assessment of suboccipital pain was determined using a visual analogue scale (VAS), and Japanese Orthopedic Association (JOA) scores were obtained in all patients pre- and postoperatively.

After fixation, kyphotic angular change in atlantoaxial joint and decrease C2-7 SVA were marked in the OO group. Both the OO and non-OO groups improved in neurological function and outcome after surgery 8).