Pneumocephalus is defined as the presence of air within any of the intracranial compartments.

Pneumocephalus without a known underlying cause is defined as spontaneous pneumocephalus.

When this circumstance causes increased intracranial pressure that leads to neurological deterioration, it is known as tension pneumocephalus.

It is a rare but potentially serious complication of spine surgery related in most cases with inadvertent dural tear during the operation. Most collections are small, behave benign, and respond to conservative therapy.

A review of 295 patients indicates that trauma is the most common cause, accounting for 75% of cases. Infection, most common chronic otitis media, accounted for 9% of the cases reviewed 1).

Pneumocephalus is usually a self-limiting condition commonly associated with neurosurgical interventions, penetrating intracranial injury, skull base fracture, craniofacial trauma, tumors of the skull base and rarely, can occur spontaneously or after an inadvertent dural tear. 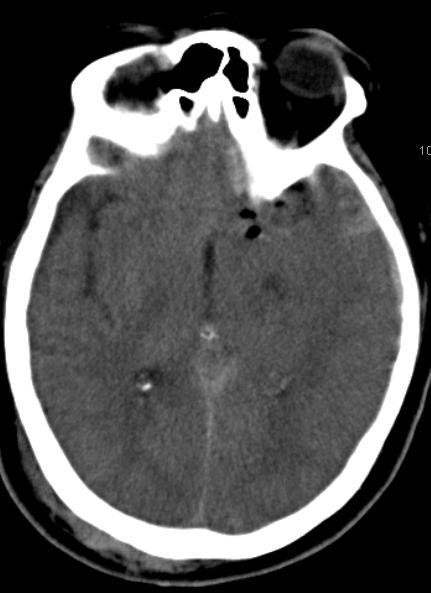 CT of a Posttraumatic pneumocephalus in the parasellar region

At least two possible mechanisms for the development of PNC are described 2). One is the effect of ball valve, where the air enters from the extracranial space through CSF leakage, which allows input but not output. When the intracranial pressure increases, the brain, and the dura plug the fistula tract and prevent air from going out. Another theory is known as the inverted soda bottle effect. Loss occurs when the CSF for a fistula or external drainage causes negative intracranial pressure. Air enters as bubbles, replacing the CSF as the pressure in the two cavities balance. A more unusual mechanism is the production of gas in situ due to infection by germs forming gas 3).

It can be located in the epidural, subarachnoid, intraventricular, intracerebral, or subdural space, with the subdural space most frequent. The common site is frontal, followed by the occipital and temporal areas 6)

Typically asymptomatic and requires no treatment.

A minority of patients describe 'bruit hydro-aerique' (a splashing noise on head movement, equivalent to the succussion splash of pyloric stenosis) 8).

This noise may also be audible to the examiner with the aid of a stethoscope.

Patients often report sounds in the head after craniotomy.

In a prospective observational study of patients undergoing craniotomy with dural opening. Eligible patients completed a questionnaire preoperatively and daily after surgery until discharge. Subjects were followed up at 14 days with a telephone consultation.

One hundred fifty-one patients with various pathologies were included. Of these, 47 (31 %) reported hearing sounds in their head, lasting an average 4-6 days (median, 4 days, mean, 6 days, range, 1-14 days). The peak onset was the first postoperative day and the most commonly used descriptors were 'clicking' [20/47 (43 %)] and 'fluid moving' in the head [9/47 (19 %)]. A significant proportion (42 %, 32/77) without a wound drainage experienced intracranial sounds compared to those with a drain (20 %, 15/74, p < 0.01); there was no difference between suction and gravity drains. Approximately a third of the patients in both groups (post-craniotomy sounds group: 36 %, 17/47; group not reporting sounds: 31 %, 32/104), had postoperative CT scans for unrelated reasons: 73 % (8/11) of those with pneumocephalus experienced intracranial sounds, compared to 24 % (9/38) of those without pneumocephalus (p < 0.01). There was no significant association with craniotomy site or size, temporal bone drilling, bone flap replacement, or filling of the surgical cavity with fluid.

Sounds in the head after cranial surgery are common, affecting 31 % of patients. This is the first study into this subject, and provides valuable information useful for consenting patients. The data suggest pneumocephalus as a plausible explanation with which to reassure patients, rather than relying on anecdotal evidence, as has been the case to date 9).

Rapid neurologic deterioration following craniofacial resection may be caused by the development of tension pneumocephalus 10).

Nothing is intensely black as air. This can be better appreciated on bone-windows than on soft tissue windows.

A high degree of suspicion is needed to make the diagnosis, prompt treatment, as well as remedying the source of air to prevent unwanted morbidity and mortality 12). Tension pneumocephalus usually requires an emergent management.

Supplemental oxygen increases the rate of absorption of pneumocephalus 13).

An 84-year-old man presented with dysarthria and incontinence. Computed tomography revealed an intraventricular pneumocephalus, thinning in the petrous bone, fluid in the air cells, and cleft in temporal lobe. A right subtemporal extradural approach was taken to detect bone-/-dural defects, and a reconstruction was performed using a musculo-pericranial flap.

This is the first patient of an isolated intraventricular spontaneous pneumocephalus without any other site air involved. Surgical approaches to repair such bone and dura defects should be considered an appropriate option 14).