The vagus nerve, historically cited as the pneumogastric nerve, is the tenth cranial nerve or CN X, and interfaces with parasympathetic control of the heart and digestive tract.

Upon leaving the medulla oblongata between the olive and the inferior cerebellar peduncle, the vagus nerve extends through the jugular foramen, then passes into the carotid sheath between the internal carotid artery and the internal jugular vein down to the neck, chest, and abdomen, where it contributes to the innervation of the viscera, reaching all the way to the colon. Besides giving some output to various organs, the vagus nerve comprises between 80% and 90% of afferent nerves mostly conveying sensory information about the state of the body's organs to the central nervous system.

The right and left vagus nerves descend from the cranial vault through the jugular foramina, penetrating the carotid sheath between the internal and external carotid arteries, then passing posterolateral to the common carotid artery. The cell bodies of visceral afferent fibers of the vagus nerve are located bilaterally in the inferior ganglion of the vagus nerve (nodose ganglia).

The left vagus nerve enters the thorax between left common carotid artery and left subclavian artery and descends on the aortic arch. It gives rise to the left recurrent laryngeal nerve, which hooks around the aortic arch to the left of the ligamentum arteriosum and ascends between the trachea and esophagus. The left vagus further gives off thoracic cardiac branches, breaks up into the pulmonary plexus, continues into the esophageal plexus, and enters the abdomen as the anterior vagal trunk in the esophageal hiatus of the diaphragm. 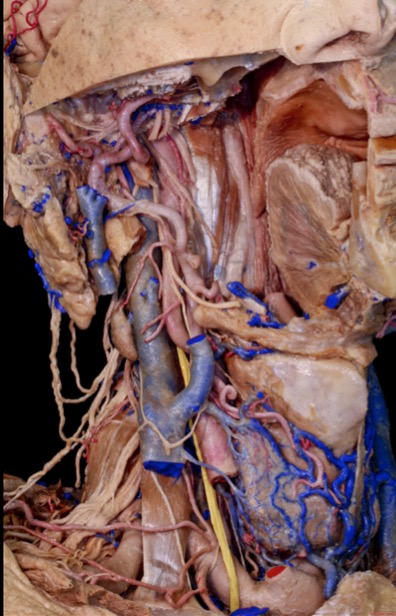 The sternocleidomastoid muscle has been removed to expose the external and internal carotid artery. The omohyoid muscle defines the inferior border of the carotid triangle.

The vagus nerves are paired, however, they are normally referred to in the singular.

Brain tumors, traumatic head injury, and other intracranial processes including infections can cause increased intracranial pressure and lead to overstimulation of the vagus nerve. As a result, increased secretion of gastric acid may occur which leads to gastro-duodenal ulcer formation known as Cushing's ulcer.

Clinically shown by Cushing's Yale Registry, a tumor or lesion can disrupt this circuitry, leading to gastroduodenal ulceration. Cushing said that it was “reasonable to believe that the perforations following posterior fossa cerebellar operations were produced in like fashion by an irritative disturbance either of fiber tracts or vagal centers in the brain stem.”

Harvey Cushing's pioneering work depicted in his Yale registry serves as a milestone for continuing research that can further discern this pathway 1).

The 10th cranial nerve (CN X) is at risk during surgery in the lower cerebellopontine angle (CPA).

Recordings from endotracheal surface electrodes were reliable and eligible for analyses in 17 patients; in 3 patients, no surface electrode compound motor action potentials (CMAPs) could be obtained. Those patients with sufficient recordings underwent surgery in the CPA for tumors in 14 patients and for nontumor pathologies in 3 patients. In 12 patients, bipolar stimulation of motor rootlets in the CPA resulted in simultaneous CMAPs recorded from both surface electrodes and needle electrodes placed in the soft palate. Coactivation was particularly seen in patients with an intricate relationship between lower cranial nerves and tumor formations (n = 9/10). Amplitudes and latencies of vocal cord CMAPs showed high interindividual but low intraindividual variability. Parameters were not well correlated with the type of surgery (tumor vs nontumor surgery) and lower CN anatomy (displaced vs undisplaced). In 2 patients, vocal cord CMAPs were lost during tumor surgery, which was associated with postoperative dysphagia and hoarseness in 1 patient.