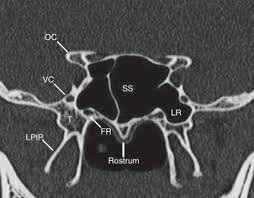 The pterygoid canal (also vidian canal) is a passage in the skull leading from just anterior to the foramen lacerum in the middle cranial fossa to the pterygopalatine fossa.

The vidian canal (VC), a bony tunnel in which the vidian artery and vidian nerve pass, has been widely known as an important landmark to identify the anterior genu of the petrous segment of the internal carotid artery (AGPCA) especially during lateral extended endoscopic endonasal approachs (LEEEAs).

A variety of previously undefined features of the vidian canal that can alter the course of surgical procedure were defined. The position of the vidian canal with respect to the petrous internal carotid artery (ICA) was extensively described. From a surgical standpoint, a working room inferior and medial to the vidian canal might not always be a safe approach, because the vidian canal could be located superior to the level of the anterior genu of petrous ICA according to the findings in this study 1)

The objectives of a study in the Japanese population are to describe the radiological anatomic features and relationships between VC and its surrounding structures, and discuss the clinical implications.

Mato et al studied 231 high-resolution computed tomography (CT) scans with a slice thickness of 0.5 mm. All the patients had known sellar or parasellar pathologies but without any involvement of VC. The following VC-related parameters were examined: its length, relationship to AGPCA, course from the pterygopalatine fossa to the carotid canal, its position relative to the medial pterygoid plate and pneumatization pattern of the sphenoid sinus. Mean length of VC is 14.6 mm. There is more tendency of straight-running VC compared to other populations. VC locates infero-lateral to AGPCA in all the cases. The protrusion of VC and the paraclival carotid artery to the sphenoid sinus, as well as well-pneumatization of the sinus is also observed more frequently in almost a half of the population. Surgeons who perform LEEEAs in Japanese patients must know these anatomical features. The characteristics particular to Japanese populations may facilitate better identification of VC and exposure to AGPCA intraoperatively 2).